Struggling to Use Your Superpower 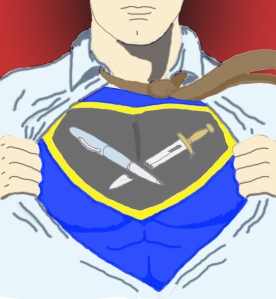 Does having a superpower mean life is easy? On the contrary, it means a life of struggle. Every superhero, no matter how invincible, runs into an enemy or situation which pushes him to the limits of his power. On this blog, I’ve compared the ability to write to a superpower, because it can be used in a variety of situations to help others and to change the world. Yet like any superpower, the ability to string words together often leads to a life of struggle.

On his blog dedicated to the craft of writing, Jeff Goins asked whether or not writing is hard. It’s not that the physical act of writing is hard: you simply sit at a keyboard and type. Rather, it is the mental, emotional, and spiritual aspects of writing which make it so difficult at times.

My favorite superhero is Batman. He is a normal man whose super-heroism results not from some exceptional power, but from his own courage, determination, and ingenuity. Batman is smart. Whenever the other, more powerful members of the Justice League are powerless to deal with a crisis, Batman is the one with the quiet confidence and mental clarity to devise a solution.

Sometimes having exceptional abilities can be a real liability. Superman is so used to being able to smash his way to success that he can become uncertain when those powers are not enough. Batman, on the other hand, always has to get by on his own wits and determination.

It’s the same for writing. There are people who seem naturally gifted at stringing words together, but those writers often become crippled when the words don’t come easily. Every writer has moments of doubt and uncertainty. Are my words powerful enough? Am I making myself clear? Am I really saying anything that hasn’t been said before? It is the writer who can push through this uncertainty to get something down on paper who ultimately ends up changing the world.

If you don’t know what to write, write something. Even if you throw it out later, the act of writing itself can help you focus your thoughts and arrive at a solution. Even Batman’s initial plans usually fail, but he learns from his mistakes and ultimately triumphs.

My son Caleb’s favorite superhero is Spider-man. Spider-man is smart like Batman, as well as being blessed with a variety of superpowers. Yet Spider-man is often emotionally conflicted. He struggles with the fact that some people question his motives or blame him for the unintended consequences of his actions. He also worries that the people he loves will be hurt by his poor choices.

Like Spider-man, every writer faces an emotional struggle. Will other people like what I write? Will they think I’m clever, or stupid? Will they call me a hack? It is that fear of being misunderstood that leads many writers to give up before they start, or to keep what they write to themselves. But what good is a superpower if it doesn’t benefit anyone?

Spider-man inevitably pushes through his emotional turmoil to do the right thing. You’ll need to push through yours to do the write thing. (Hmmm, will you think that pun was clever or corny? Maybe I should change it … oh, never mind!)

Every superhero struggles to keep his or her secret identity secret, but a writer can’t hide behind a mask. A writer can’t even hide behind a pseudonym. The writer must inevitably bare his or her own soul in the process of writing. It can feel like standing in front of a crowd naked, or perhaps wearing brightly colored spandex. Writing makes you vulnerable in a way that goes beyond the mere risk of embarrassment. If you bare your soul on paper, and others don’t like what you write, it can feel a little like being rejected by someone who really knows you well. It is this fear of rejection which is perhaps the greatest struggle a writer must face.

That’s why it’s so important for a writer to tap into the source of his superpower. Without a source of inspiration, without a motivation higher than our own need to be liked, we can find it easy to hold back, play it safe, and stop short of writing with real power.

So is writing hard? You bet it is. But if we can work through our mental, emotional, and spiritual struggles, we can use our superpower to make a real difference in the world. Remember, heroism comes not in the mere exercise of a superpower, but in the superhero’s triumph in the face of a momentous struggle.

Question: Which of these struggles do you find most challenging?

Posted on August 24, 2011, in Writing is a superpower. Bookmark the permalink. Leave a comment.