The Enslaving Epidemic of Voyeurism 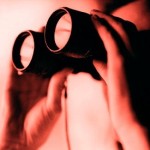 Just like the modern drug trade, the modern slave trade is driven by demand—the demand of seemingly respectable people who see very little wrong with their “harmless” acts of voyeurism.

After reading this article, I returned to the newspaper’s home page and looked again at the “Popular Stories” section. Right next to the above-mentioned article was a thumbnail picture of a woman at the beach, with a headline praising the bikini body of this ex-wife of a popular sports celebrity. The juxtaposition of these two stories was striking. The one article reminds us that the voyeuristic consumption of internet pornography results in the abuse and exploitation of countless innocents, while the second article invites us to ogle a woman who wore a bikini to the beach!

I didn’t click on the thumbnail of the bikini-clad woman or read the accompanying “article,” but the thumbnail itself looked like a telephoto shot taken by paparazzi from a distance. While I suppose this celebrity ex-wife may have been looking for that kind of attention, it is far more likely that this photo represents an invasion of her privacy—an unwanted act of voyeurism which is now being featured on the home page of an ostensibly “respectable” newspaper.

The appearance of these two articles right next to each other is a visual reminder of our cultural ambivalence toward voyeurism. On the one hand, we recognize a direct connection between pornography and exploitation; on the other hand, we use more “innocent” forms of voyeurism to sell products, drive web traffic, and entertain ourselves. Yet even the telephoto shot of a bikini-clad woman is fundamentally an act of exploitation. If we were stalking this woman in person and snapping pictures of our own, we would quite reasonably be regarded as creepy. But if a creepy paparazzo takes the picture, we see nothing wrong in consuming the result of his creepiness: namely, the objectification of the woman in question.

Ultimately, the difference between child pornography and the countless embarrassing or private moments which are now “caught on camera” and spread via the internet is merely one of degree. Seemingly “harmless” acts of voyeurism still objectify people and invade their privacy, but even worse, they desensitize us to darker and more exploitative forms of voyeurism—the voyeurism that drives the enslavement of the innocent.

If we want to combat the growing epidemic of sexual enslavement, we ought to begin by examining our own hearts to see where we contribute to its spread. What forms of voyeurism have you and I developed an appetite for? What invasions of privacy do we excuse as harmless? Which people do we find it acceptable to ogle and objectify?

Remember, it is demand which drives the sexual slave trade. To reduce that demand, we need to curb our own appetite for voyeurism—in all its forms.