The Gospel Does Not Affirm Sin; It Transforms Sinners 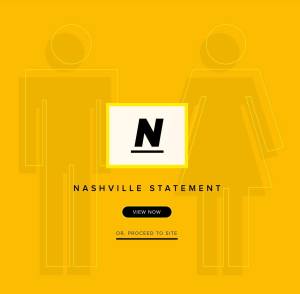 A few days ago, a number of evangelical leaders released a statement affirming the Bible’s clear teaching that “God has designed marriage to be a covenantal, sexual, procreative, lifelong union of one man and one woman, as husband and wife” and denying that He “designed marriage to be a homosexual, polygamous, or polyamorous relationship.” Known as the Nashville Statement, it contains a series of affirmations and denials regarding what the Bible teaches about human sexuality.

In any previous age, Christians and non-Christians alike would have looked at this statement, yawned, and said, “Of course that’s what the Bible teaches!” Yet in a culture where gender is seen as a fluid social construct and any kind of sexual “love” is regarded as good, the Nashville Statement is being reviled by progressives as an attempt by “powerful people of means” to “use the platform of the Church to demean the basic dignity of gay, bisexual, lesbian, trans, intersex, and queer people.”

This last quote comes from A Liturgists Statement, a progressive response to the Nashville Statement which offers its own set of theological affirmations. It is a stunning example of the self-contradictory and unbiblical worldview currently being promoted as “Progressive Christianity.” It also clearly demonstrates that what is at stake in this debate is nothing less than the Gospel itself.

The Liturgists Statement begins by casting doubt on the Bible’s clarity on the subject of sexual sin:

“Biblical” morality has been used to justify slavery, resistance to interracial marriage, genocide, and war. The scope of the Bible’s narrative allows a broad interpretation of what is right and moral, and both the church and society at large have moved toward universal justice and acceptance on issues once thought to be “crystal clear.”

In regards to Christians across the spectrum of sexual orientations and gender identities, it’s past time to accept and affirm them as they are. In the same way that we no longer accept the morality of slavery based on its inclusion in our scriptures, we can no longer project first century notions of sex and sexuality on people today. The very notion of “orientation,” or even “heterosexual” would be completely foreign to the authors of both the old and new testaments in the Bible.

This argument can best be summarized as follows: In spite of the Bible, our views on slavery have changed, so why not our views on sexual sin? The problem with this is that although the Bible was used by slaveholders to justify slavery, it was also used by abolitionists to call for slavery’s end, and over time, the biblical arguments against slavery proved more compelling than those in favor of it. It’s not that the Bible clearly said “slavery is good” and “freedom is bad,” and we suddenly decided to read the Bible a different way. On the contrary, the Bible promised freedom from human bondage in the exodus of the Old Testament and freedom from bondage to sin in the Gospel of the New Testament. In the end, slavery was rejected because it violated the clear teaching of Scripture.

The Liturgists Statement argues that “we can no longer project first century notions of sex and sexuality on people today.” It goes on to argue that concepts of sexual “orientation” or even of being “heterosexual” would be completely foreign to the biblical authors. Instead of making a biblical argument for their understanding of sexuality, the authors of this statement simply brush the Bible aside as irrelevant to the discussion. Those first-century biblical authors simply didn’t think about sexuality the way we do! Okay, so why do we think our understanding is right and their understanding is wrong? How is this anything other than chronological snobbery, the fallacious assumption that the thinking of our own age is inherently superior to that of previous ages?

By the way, shouldn’t the argument that the biblical authors had no concept of “orientation” and “heterosexuality” simply lead us to conclude that such concepts are unbiblical? The authors of this statement are not seeking to live in accordance with what the Bible teaches, but are simply trying to make the Bible conform to an external standard which is foreign to it. In the end, it is not the Bible, but rather some undefined concept of “universal justice and acceptance,” which they use as their ethical foundation.

The Liturgists Statement goes on to make a series of affirmations of what they believe about human sexuality. Here is the first:

We believe that people of all sexual orientations and gender identities are fearfully and wonderfully made, holy before God, beloved and beautiful as they are.

The Bible does indeed teach that all people are “fearfully and wonderfully made” (Psalm 139:14), their bodies being “knitted together” in their mothers’ wombs (v. 13). The Bible also teaches that all people are created in the image of God (Gen. 1:26-27; 9:6), designed to reflect God’s glory on earth and therefore intrinsically valuable. Yet the Bible also teaches that human nature was radically marred and corrupted by mankind’s fall into sin (Romans 3:23; 5:12). Because of this, our only hope is to be set free from sin through the redemptive and transformative work of Christ (Rom. 6:19–23), by which we become a new creation (2 Cor. 5:17). It is therefore contrary to the Bible to affirm that any person, apart from the saving work of Christ, is “holy before God, beloved and beautiful as they are” (emphasis added). It is only those who are in Christ who are “holy before God,” since they have had Christ’s righteousness imputed to them and they are being continually transformed into his image. If you tell anyone—whether gay or straight—that they are holy, beloved, and beautiful “as they are,” you tell them that they have no need of the saving work of Christ. Such “I’m okay, you’re okay” theology may leave them feeling “affirmed” in the short term, but it ultimately damns them to perish in their sins.

The Liturgists Statement then affirms:

We believe all people have full autonomy over their bodies, sexual orientations, and gender identities, and the diversity of identities reflects the creative power of a loving God.

This affirmation clearly articulates the heart of the philosophy behind our culture’s view of human sexuality: the desire for absolute “autonomy” over one’s personal identity. The notion that a fundamental aspect of our identity (our sex) lies beyond our control is completely galling to modern man’s fetish for self-determination.

So which is it? Are those who embrace homosexual desires or who reject their own biological sex born that way, and therefore unable to change their sexual orientation or sense of their own gender identity? Or are they autonomous beings capable of choosing any number of options when it comes to orientation and gender? If the latter, why not choose to identify with the gender and orientation which corresponds to the body they were born with?

The second affirmation also asserts that “the diversity of identities reflects the creative power of a loving God” (emphasis added). The irony of this statement is that when it comes to sex, only one pair of corresponding identities and orientations actually has “creative power”: the heterosexual coupling of male and female. All the rest of that “diversity of identities” is completely sterile and incapable of creating new life. If God has chosen to show his own creativity by making some people desire members of their own sex or feel as if they were born with the wrong body, he has done so while simultaneously denying those individuals the “[pro]creative power” he grants to heterosexual couples. The theological implications of such a view of God are troubling to say the least.

The third affirmation of the Liturgists Statement attempts to make an argument from Scripture:

We believe that God is love, and that ‘anyone who loves is born of God and knows God’. (I John 4:7) God is honored in any consenting and loving relationship between adults, and therefore, all such relationships deserve honor and recognition.

Note the equivocation when it comes to the use of the word “love.” The Bible says that love is from God (1 John 4:7), and then a few verses later explains what kind of love it is talking about: “This is love: not that we loved God, but that he loved us and sent his Son as an atoning sacrifice for our sins” (v. 10). The context of this passage is not at all focused on sexual relationships, but on God’s redemptive love for sinners. Yet the Liturgists Statement uses this passage to argue that “any consenting and loving [sexual] relationship between adults” is an expression of divine love. Such an ethical principle will inevitably lead to absurdity. For example, is “God honored” by the consenting and loving relationship between a man and his mistress, even though that relationship constitutes a betrayal of the man’s wife? Is marriage a requirement for God to be honored in a “consenting and loving” sexual relationship, or is any sexual relationship to be regarded as God honoring?

The last affirmation I’ll deal with draws an unequal equivalency:

We believe that same-sex relationships and marriages are as holy before God as heterosexual marriages.

The equivalency being affirmed here is that same-sex marriages are equally “as holy” as heterosexual ones. Yet notice the inequality which got slipped in there. On the homosexual side, it is “relationships and marriages” which are regarded as holy, while on the heterosexual side, it is only “marriages.” Is this just an unintentional slip? I don’t think so. The Liturgists Statement is careful not to require marriage as a condition of holiness for same-sex relationships. After all, that would condemn the many homosexuals who prefer serial monogamy or outright promiscuity to the long-term commitment of same-sex marriage. An ethic of universal acceptance of any sexual relationship cannot impose marriage as a requirement for holiness, even though it is the only kind of heterosexual relationship which the Liturgists Statement describes as holy.

While the Liturgists Statement is written in the form of a Christian creed, it ends up being an illogical jumble of contradictory affirmations and theological assertions which strike at the very heart of the Gospel. The Bible proclaims that a just and holy God lovingly provided the solution to human sin and corruption in the redemptive work of Jesus Christ.

All these perversions result in misery and death, and the only hope for any of us is to turn away from our sins and trust in the finished work of the resurrected Christ (Rom. 10:9–13). The good news of the Christian gospel is that “Christ Jesus came into the world to save sinners” (1 Tim. 1:15). The Liturgists Statement rejects that gospel in favor of the empty promise that sinners are “holy before God, beloved and beautiful as they are.” Rather than calling sinners to repent and believe, the Liturgists Statement simply redefines sin so that Christ and the cross are no longer necessary.

By way of contrast, hear the message of hope contained in Article 12 of the Nashville Statement:

WE AFFIRM that the grace of God in Christ gives both merciful pardon and transforming power, and that this pardon and power enable a follower of Jesus to put to death sinful desires and to walk in a manner worthy of the Lord.

WE DENY that the grace of God in Christ is insufficient to forgive all sexual sins and to give power for holiness to every believer who feels drawn into sexual sin.

Ultimately, the Nashville Statement is not merely about defending the Bible’s teaching about marriage and sexuality, and it is certainly not about “demean[ing] the basic dignity” of  LGBTQ persons. On the contrary, it is about holding fast to the gospel of Jesus Christ, which is the only hope for sinners of every stripe and color of the rainbow.